The Merida Carbon 96 is one of those ‘bikes of the moment’. People who don’t own one are curious to hear about how the light weight technology transfers to the trails, and people who do own one are always enthusiastic in their responses. I’ve been riding the XTR equipped Carbon 5000-D model for about a year and a half now.  I looked at upgrading to the 2011 Team edition late last year, but this one is still running like a dream (so many events cancelled due to wet weather has even meant I’m still running the original cluster). While it would be fun to try the different running gear on the 2011 model not enough has really changed to justify the cost of upgrading.

I’ve made a few modifications to the bike, most of which have been to make it better suited to my girly physique (stem, post, seat) or to make the set up more ‘set and forget’ rather than requiring regular servicing or tweaking between rides. After trying a few different models of front suspension, the Fox RLC forks with the gold kashima coating seem best suited to my riding style in terms of a plush feel, an ability to push through all the travel (too often when I set forks up for my low weight I only get less than 80% of their full travel), maneuverability on fun climbs, and bombproofness between services. The Schwalbe Furious Fred semi slick (but very light) tubed tyres were swapped out for some tubeless Racing Ralphs which are well suited to the sandy Eastern Australian conditions, slide predictably and enjoyably around corners and don’t wear as quick as some race week only set ups.  I also tried Ergon grips out of curiosity and find them so comfortable on long rides that I haven’t been able to take them off.  I used to get pins and needles in my chicken arms after endurance races but the Ergons have eliminated this while still providing great control in technical sections.  One thing I would love to see in the 16 inch model is a slightly lower biddon cage mounting point. The Elite side cage sits lower than most other cages and just allows a regular sized biddon to fit in the small frame without rubbing the rear shock. 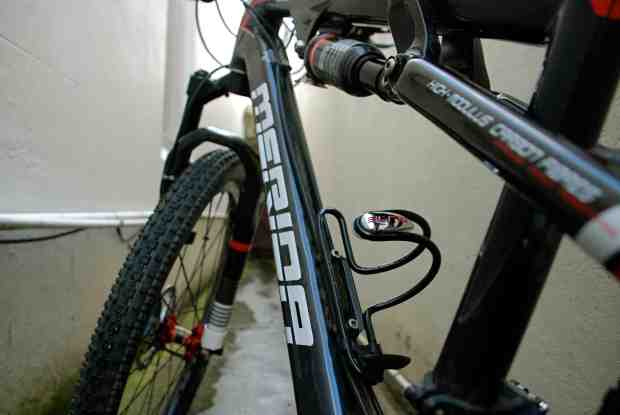 Weight weenies will probably spew at the mods listed above, and extra cash could certainly help shed some grams, but in terms of ride feel and longevity this set up feels unbelievably sweet and comes in just under 11kgs (up form 9.85kgs without pedals when new). The 2011 Team bike is around half a kilo lighter still and the 16” model comes with a stem, seatpost and grips better suited to a 16” rider, saving extra grams, time and money.

What I love about this bike – and I should preface this by saying that my favourite types of riding are XC and endurance, and that as far as trails are concerned, the more flowy or rocky and technical the better – is that unlike other bikes where every now and then you wish it was a little more this or a little more that, the 96 consistently provides the best ride feel I could ask for. It even had a brief stint as a singlespeed (click here for the conversion photos, or here for the party that followed). The rear shock design pushes you up over technical climbs and adds comfort to any ride, but doesn’t take away too much of the trail feel that hardtail riders enjoy. The rear lock out comes in handy on tar commutes to sweet trails, but I’ve used it in a race all of once.  It’s a pretty bob-free system, so the lock out just meant a bit less comfort, and didn’t make me feel like I was saving any time.

The 96 rides very instinctively. Like a lot of high-end bikes, instead of looking where you want to go and hitting that general vicinity, this one hits the parts of the trail you’re after with pinpoint precision. Bombing down a technical, twisty, fall-and-fall-hard trail on any bike you are unfamiliar with is never a good idea on the first ride, but I threw caution to the wind on my first day out on the 96 and was more than rewarded.  Lucky, because those types of ride are often the most fun!

For the reasons listed above, it’s not surprising that conversations with other 96 owners reveal a similar level of enthusiasm for their steed, and that when other riders demo a 96, they frequently end up buying one too.  Lucky for all the demo opportunities held at races or by independent bike shops at the moment! I better watch out though, with more people onto my winning advantage, I’m going to have to start digging deeper to stay ahead!

Thank you to Dave Bateman (www.davebatemanphoto.com) and Chanh Le Huy for the memorable race images. Other photos by Kath Bicknell.