The bikes didn’t get that dirty afterall!

“Stay within your limits on the first couple of laps,” yelled my teammate, Shane “Tails” Taylor, as he tagged me at transition. “It’s a bit slippery out there!” Having lain awake in the tent the night before, listening to the rain outside, slippery was a given. I had visions of mud puddles the size of small dams and legs dripping with water as I applied the point and shoot technique down along the singletracks. I pedaled down the first fire road, nervously anticipating what lay ahead.  Two corners into the first singletrack, my wheels slid around the corner and shot me out the other side of it.  I smiled. Tails’ advice was spot on. There’s something about the threat of a bad day on the trails that makes a good one even sweeter. 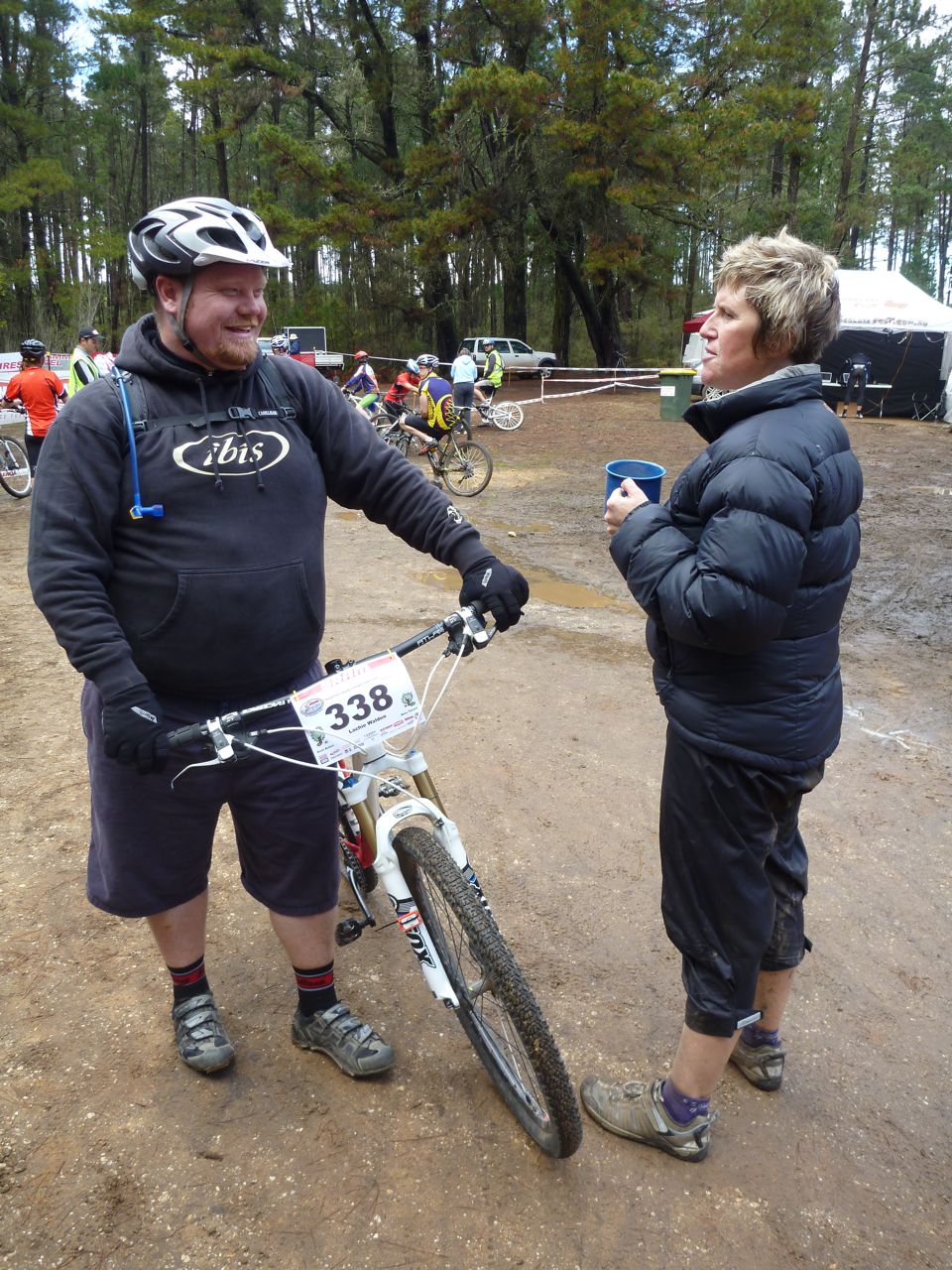 The sweetness of the day just wasn’t limited to the trails. There’s something about lap format enduros that makes time off the bike just as fun as time on it. Transition area highlights from round four therefore included: Paula Sutton’s magical (and moist) rhubarb cake, Rob Parbery’s very efficient water-pumpy-spray-ey whatzit (a clean bike is a happy bike), Gail Sutton’s refilling of the water-whatzit (so everyone could have a go), a teammate who volunteered to finish with a double lap, coffee, pre-race dinner (and profiteroles) with good friends, and winning 75 bucks and some useful prizes after nabbing second place. 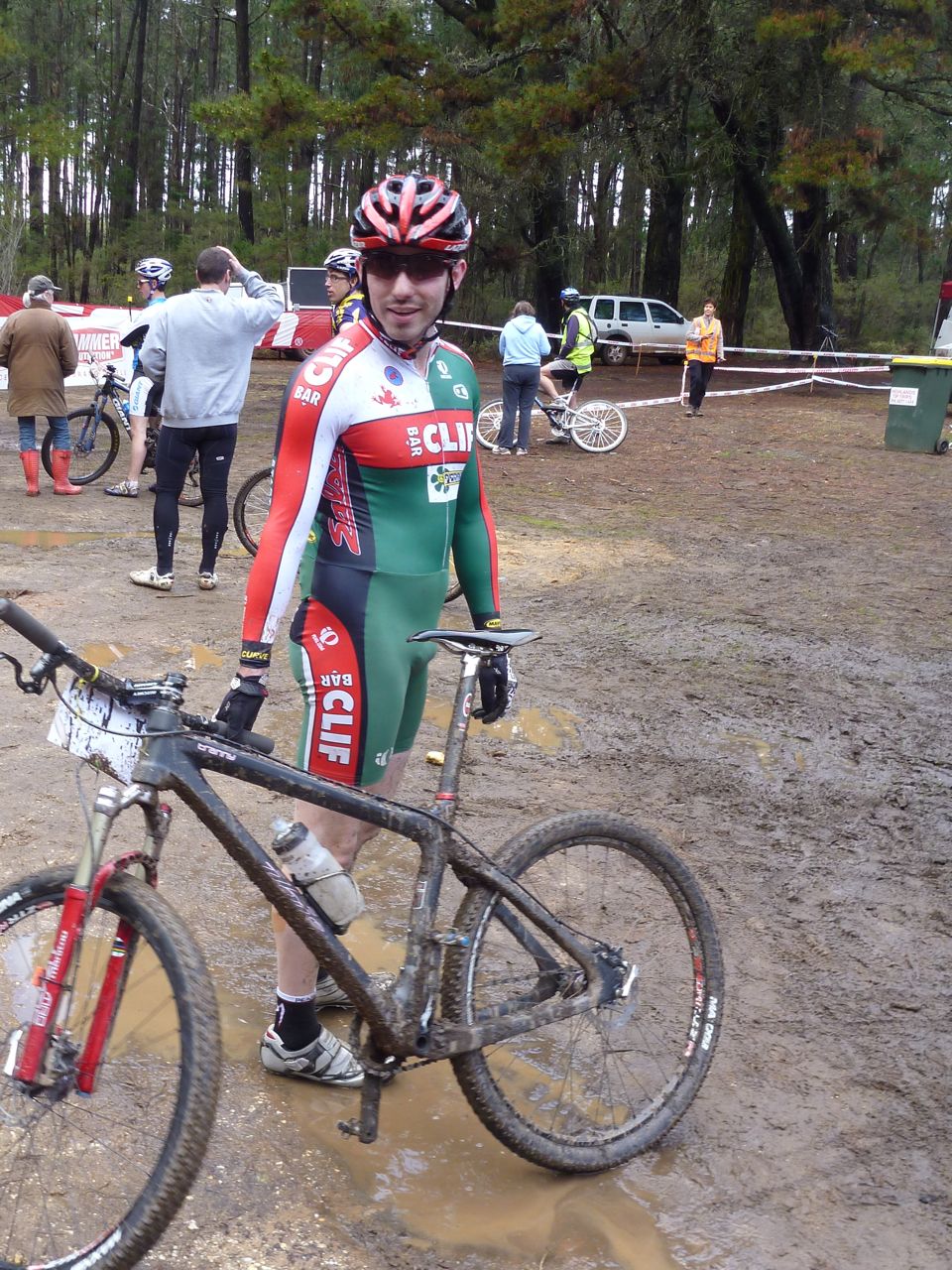 Dave “I wish I bought my matching cyclocross” Rome.

Dave Rome also impressed by being the only man in a skinsuit who didn’t give a stuff about race speed. Forced to start with a triple lap because his teammates were later than he was, he also squeezed in a chat with one of the event team, and assisted another rider out on the trails. It is rumoured that the real reason for wearing a Clif Bar suit was so he could eat a Clif Bar while wearing it.  I find myself wondering what he’ll eat next time he takes his Spiderman suit for a spin. 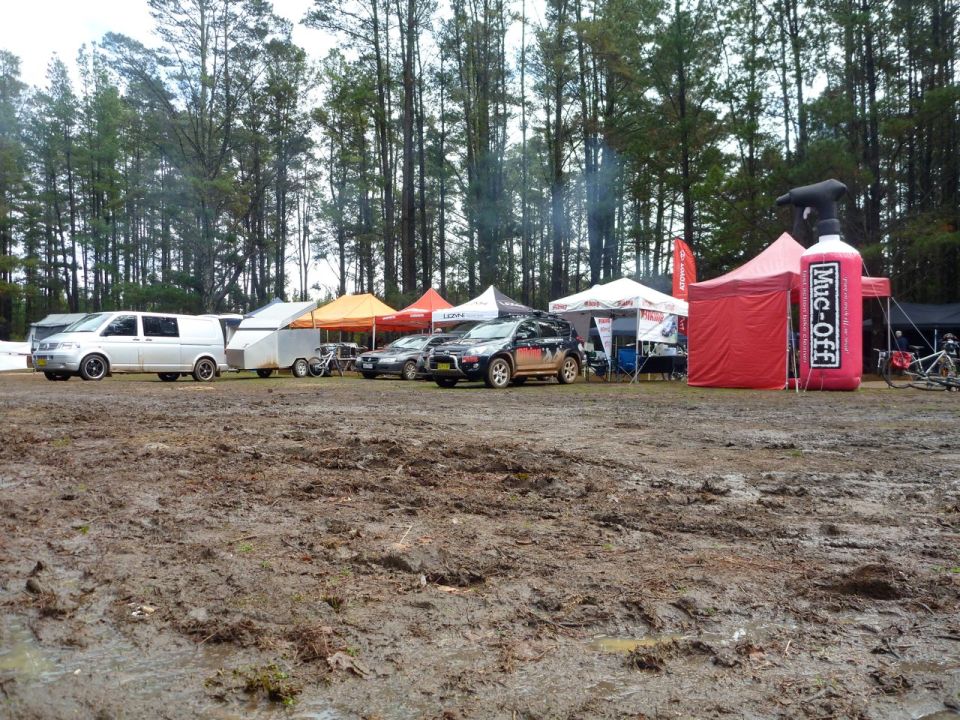 The transition area was as boggy as it got.

Thanks again to Tails for inspiring good riding and for the pre- and post-race banters, and to Rob Parbery for helping us to re-live the event in photo form.  Thanks also to the Chocolate Foot team and the Southern Highlands Cycling Club for pulling together such a great day out. On top of a well run event, the wet weather management was also well thought out – I’m sure many riders appreciated the email updates and post-race trail work plans that went out the day before the event. With new trails being built at Mt Annan for round five, the countdown to more transition banter and exciting riding begins!